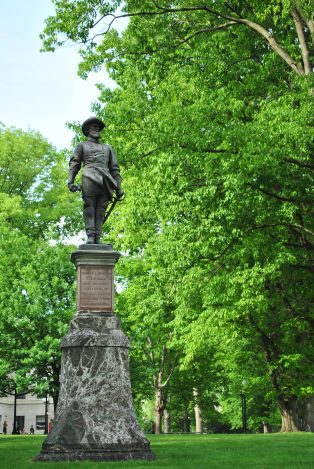 My great-great-great grandmother, Virginia Jackson Marshall (1846 – 1938), was second cousin to Stonewall Jackson. That means—if I’m counting right!—I would be his second cousin, five times removed There are a lot of extended members of the Jackson Family in WV.

West Virginians in general are family-oriented, so the large Jackson family reunions are something that are enjoyed and looked forward to, even for the now fairly distant descendants. Members of the Jackson family run the gamut from progressive to conservative—yes, we all still talk to one another and love one another, regardless—and just like any family here in the US, the vast majority of us, of every party, repudiate bigotry and want to see a world where people aren’t judged by the color of the skin.

As a member of this extended family of people, I can tell you what I’d prefer: Take the monument to Stonewall Jackson down.

Move it respectfully to a Civil War museum or a Confederate cemetery… somewhere it can be appreciated in proper context.

Because my heritage is not a statue.

Not having a monument to Stonewall Jackson in our capital will not offend my delicate sensibilities. Moving it doesn’t ignore history; in fact, that would be a recognition of what he actually stood for, and how far we’ve moved beyond that.

Placing the statue elsewhere isn’t an attack on my family or way of life.

No one at Jackson family reunions is talking about bringing back the Old South—which WV was never a part of, anyway. We’re talking about potato salad recipes, or who got married, who has new grandbabies.

Love and kindness is my heritage.

I love the United States

I love my extended family, but my family is not what that monument stands for. And I love my country, but my country is not what Stonewall Jackson fought for. West Virginia seceded from Virginia in order to stay with the Union, and we were the only state in this nation created by that principled rejection of the Confederacy and what it represents.

Look. West Virginians are often very interested in genealogy; sometimes we still live on the same land—or close by—where our Scots-Irish ancestors settled. Not too awful long ago, I met a man whose great-great grandfather was the second husband of my great-great-great grandmother. There’s no real blood there, but we had discovered new family nonetheless.

I grant it’s cool to think that I’m related to this or that infamous historical figure, but I’m not interested in emulating or honoring Jackson’s personal philosophy.

It’s 2017. We all know that the content of one’s character is far more important than the color of one’s skin. And the heroes who fought for that are the ones I’d like to see honored.

The truth is that there are plenty of brave West Virginians to honor, folks who fought for all of us, including Ruby Bradley of Spencer, WV, among the most decorated women in military history. Or we could recognize Medal of Honor recipients like Lawrence Sinnett, of Burnt House in Ritchie County, who is buried in the Harrisville Oddfellows Cemetery.

There is no dearth of heroes in West Virginia; there isn’t any need to memorialize folks who stood for something that we as a people simply don’t believe in.

I can’t speak for everyone in the Jackson family, of course, but I’d be surprised if the majority doesn’t share my view. It’s a neat historical sculpture and it should be preserved… but it shouldn’t have a place of honor at our seat of government where all WV citizens expect to be treated with equal dignity and respect.

2 thoughts on “My heritage is not a statue”